Original issue: Window did not go up enough in the back but was raising too much in the front. A common issue is that the window seals in the front but not in the rear.

Update 6-18-05:
When I took the door apart I tried to be thorough, hoping to provide as much information as possible for anyone that might have to go in there later (for whatever reason). It occurred to me that the fix was sometimes getting lost in all my ramblings, so for anyone here looking for just the fix, here it is: Go to the last picture in this post. It's a screw that you can get to through the window opening in the door. Tighten it.

Here's what I found:

- There are 3 screws that can be loosened to adjust the window left-right (from the side-of-the-door perspective).

- There are 2 screws that can be loosened to adjust the window's slant left-right (again, looking at the door from the side).

- There are some white window-stop things on the window. I believe the topmost window-stop thing on the rear of the window was part of my problem. I think it was hitting a part of the door, but I can't be absolutely certain because it's really hard to see what's going on all the way up there through the smallish hole.

- There are holes in the bottom of the door. This doesn't really have much to do with the problem OR the solution, but I noticed them and thought it might come in useful for somebody. I was able to position my flashlight in such a manner as to shine through the holes so that I could better see what was going on in there.

- The rear rail has a screw on the top of it that can be accessed from the top. It doesn't seem to adjust anything, but if it's loose it will cause you grief. 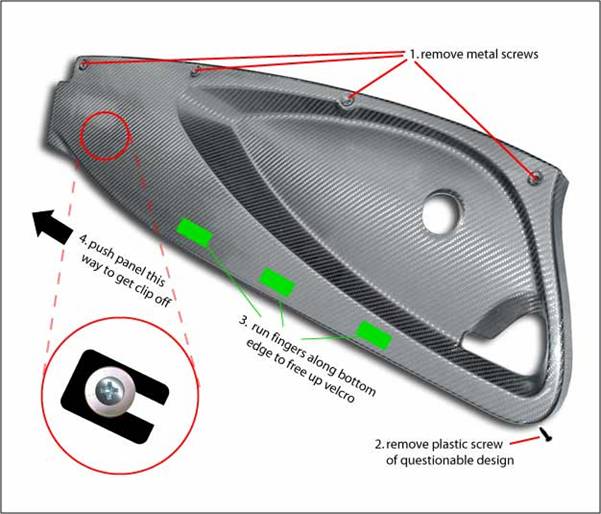 1 - The rear screw of the 3 that need to be loosened in order to adjust the window towards the rear of the car: 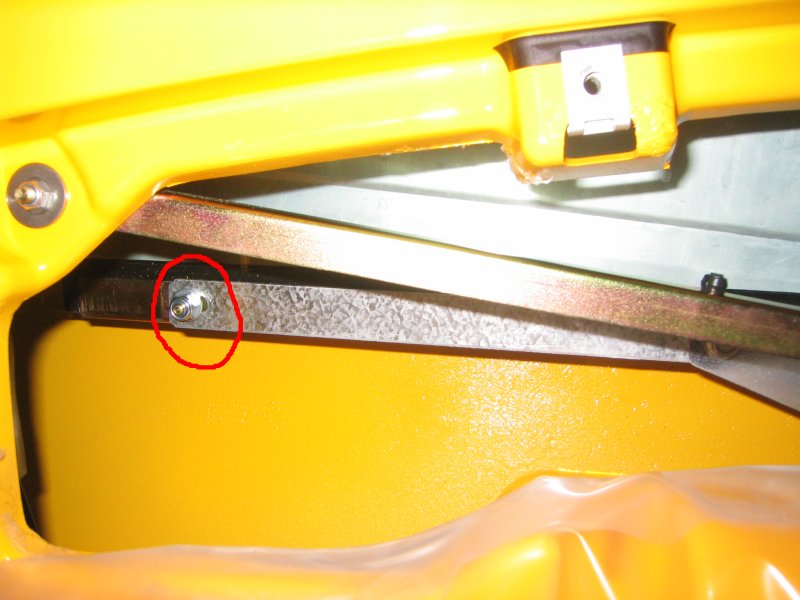 2 - The middle of the 3 screws, circled in red. The 2 screws circled in green can adjust the window's tilt. 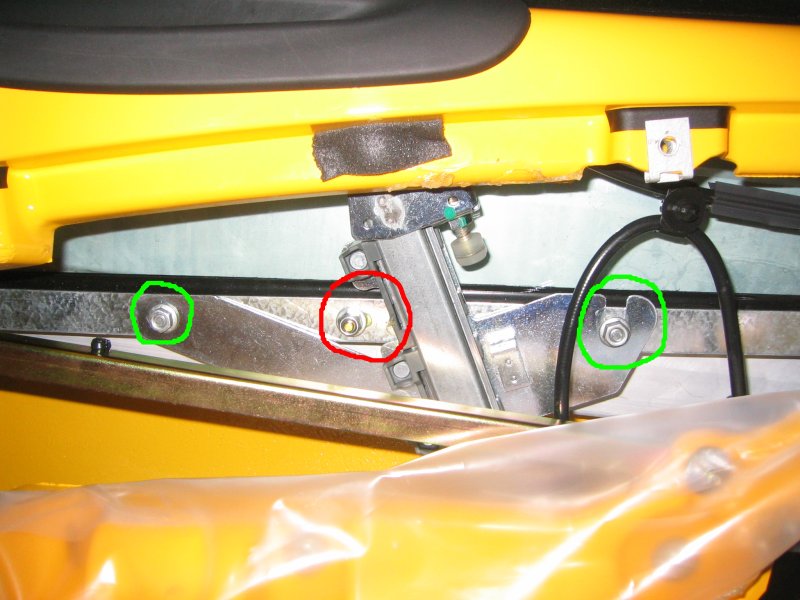 3 - The front screw of the 3. You can see it hiding behind the door-handle-assembly-thing (can you tell I've never done this?). I almost turned back here, because I didn't think I could get to it. Right under the screw you can see the bar that runs from the handle back to the door latch. I lowered the window so that the screw was just under that bar, and got to it that way with some extensions on the ratchet. There's a U-shape carved in the black piece that you can see in the picture; that's where I lined it up.
You can also see in this picture that I took the window controller off of the door panel so that I could operate the window without having that huge panel in the way of everything I was trying to do. It's only 2 screws. 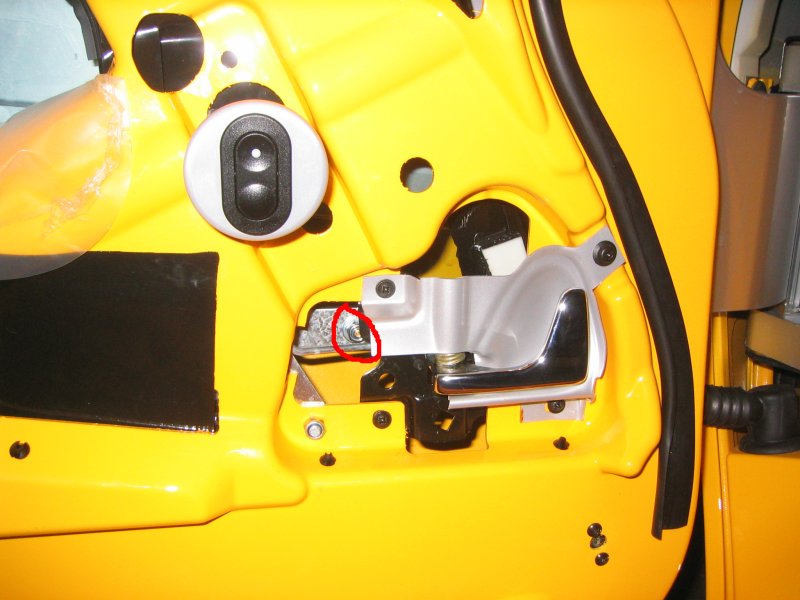 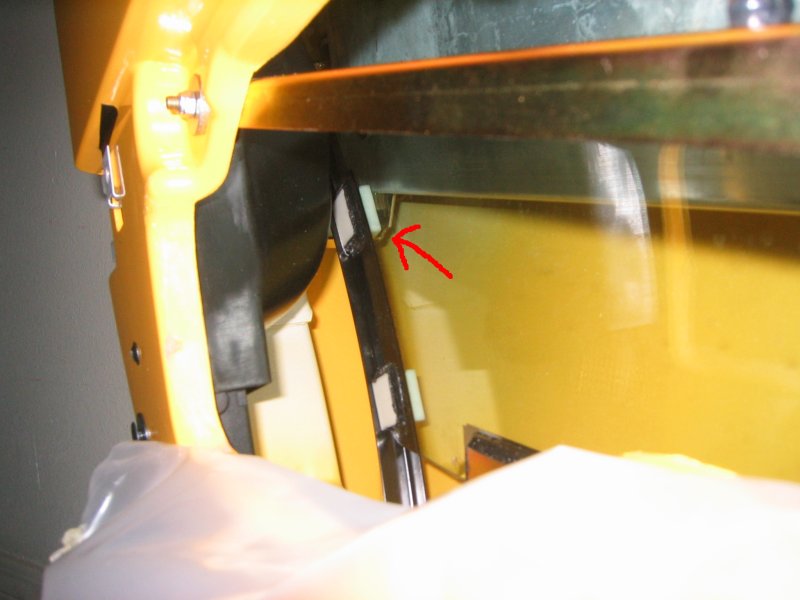 5 - The screw that holds the rear rail to the door. This is what I had to tighten to fix my problem. 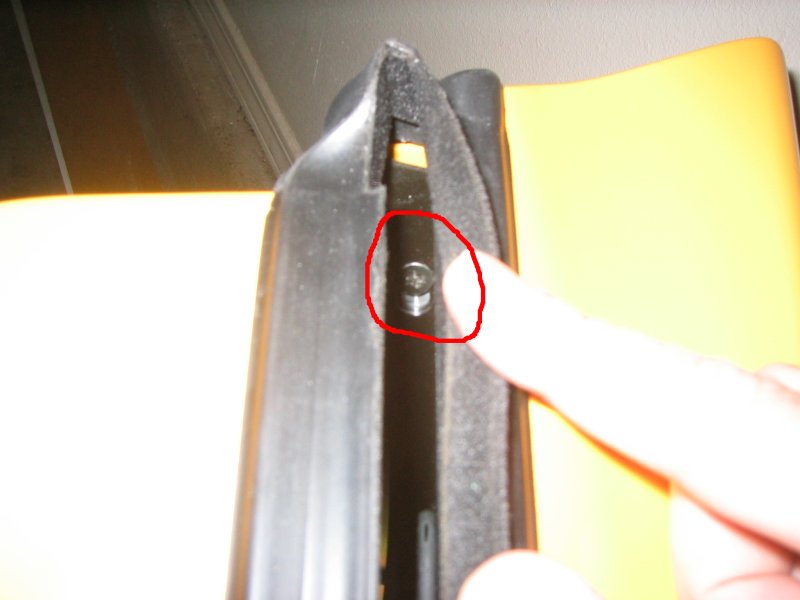 Additional adjustments that can be made are at the adjustment screws at the front and rear of the door (causes potential rattles and leaks), clockwise turns of the window angle screw at the bottom of the door press the window tighter against the seal when up: 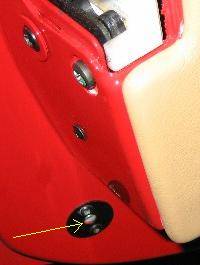 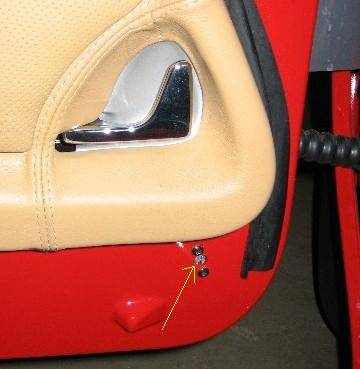