Procedure: Unlike most other cars, the bleeding process for the R32 is reversed. You bleed in the following order: 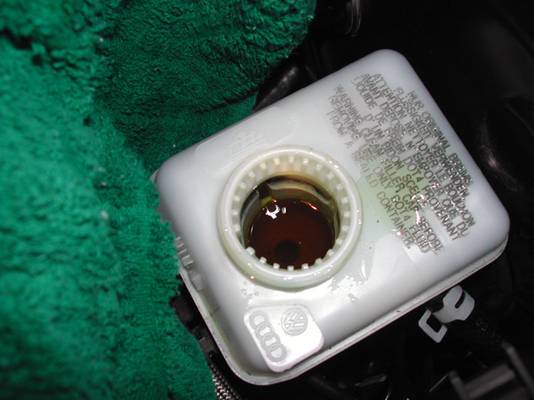 As you can see from that picture, the fluid has some debris floating in it, most likely from the corrosion inhibitors in the factory fluid not working properly (or so I'm told). This upset me as this car is extremely babied, only has 23k miles on it, and I've owned it for 21 months now. This has never happened in any of my other cars.

Make sure to clean off the mesh screen and also the inside of the reservoir. As you can see in the above picture, there is some dirt and such on the sides of the reservoir. Use a towel or rag that won't lint and clean it up.

I had originally purchased some ATE Super Blue, but after reading some threads some people have had problems with squeaking from the clutch, and supposedly the blue dye doesn't mix well with the clutch slave seals. So, I put the ATE Super Blue in our BMW and bought some Motul 5.1 for the R32. You will need three 500ml bottles of the fluid. The system holds about a litre, but it's always good to have an extra bottle when you are doing it (it came in handy for me).

After you have sucked out the old fluid from the reservoir, fill it up to the min level with the new fluid. Poor another litre into the Motive bleeder. Screw on the cap, pressurize to 14.5psi, and start at the front left. The front calipers take a 7mm box wrench for the bleeder screws. Let it flow until you see almost clear fluid coming out. Repeat for the other wheels. Of note: the rears take an 11mm box wrench for the bleeder screws. I found the easiest way to do this was put the box wrench on the screw, attach the plastic tubing, and then turn the wrench. 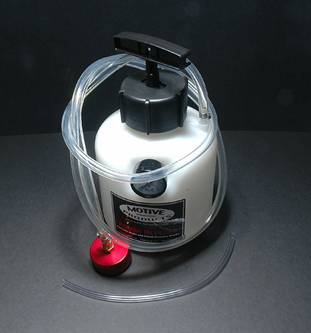 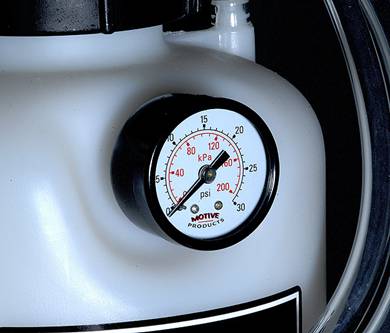 After the brakes are all said and done, it's time to flush the clutch. Make sure you have enough fluid as I used almost 500ml on the clutch. The first time I did it I lost pressure right when I was halfway through pumping the clutch and I had to do it over again.

For bleeding the clutch, follow the instructions in the picture: 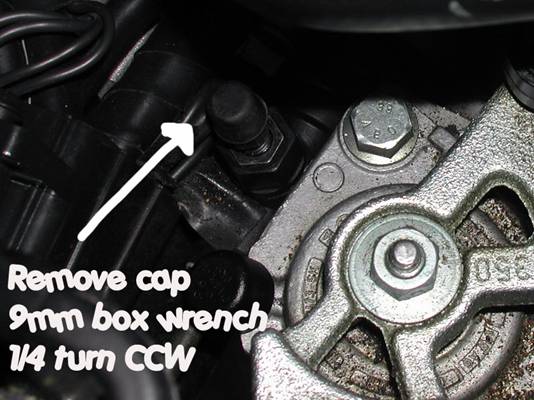 The Bentley manual calls for 2bar pressure (29PSI!) on the pressure bleeder, but I didn't use that. I pressurized to 15PSI and went at it. Get your 9mm box wrench, attach the plastic tubing, open it 1/4 turn, and fluid will shoot out. Then go inside the car, pump the clutch 15-20 times by hand. When you push it down the first time, it will fall right to the floor - this is normal! Keep pumping and by about the 10th pump you should get pressure back. After you have completed the clutch bleeding, close the screw, remove the plastic tubing and make sure to clamp the hose with something so it won't spill out of the hose and onto the shifter/etc. If it does spill, get the hose and hose it off with some water.

Results: The clutch has never been this smooth. I almost get turned on every time I press the clutch down - it's that amazing. The brakes are great, and react very well. Make sure to do atleast one ABS stop after the fluid so you can ensure everything is working properly. Make sure if you flush the fluid to do the clutch also - it only takes about 5 minutes and the result is great. I thought my clutch was smooth before, but it was never this smooth - even when I bought the car new. I am impressed with this Motul fluid thus far. I did this over a week ago but wanted to wait and post my impressions after I've had a week of driving.

If you have any questions, let me know. Hope this helps...