Standard Disclaimer Applies: The following is provided for informational purposes only, any other use is at user’s own risk. )

2. The Elise needs to be jacked up with both front wheels in the air. It is best to use the forward chassis jack points rather than the front suspension, as you will want full range of motion on the suspension during this install. (Always use jack stands when working under a car.)

[BH] I used the B points in below diagram- the stickers were gone but the circle of adhesive let me know where the jacks needed to be placed. I broke all of the lug nuts loose before jacking- alternatively a helper could apply the brakes and this could be done once the front end is off the ground. 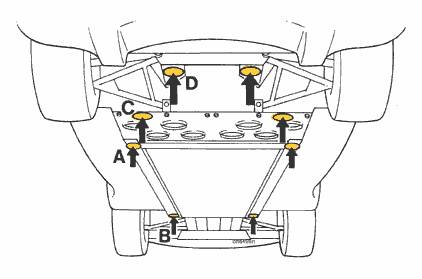 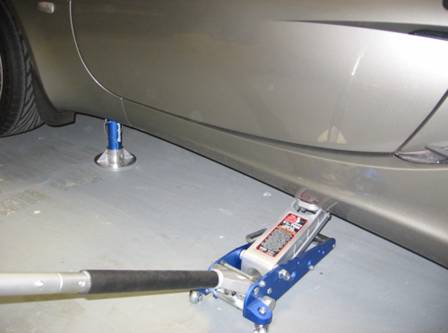 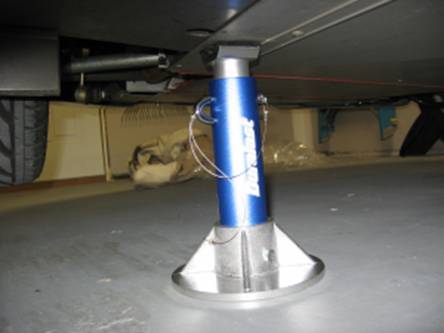 3. Remove both front wheels, and the front under-tray panel. 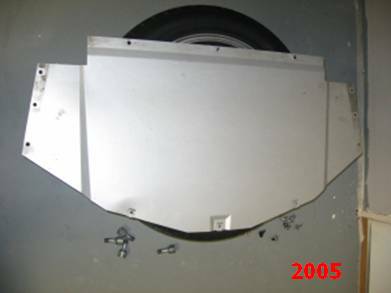 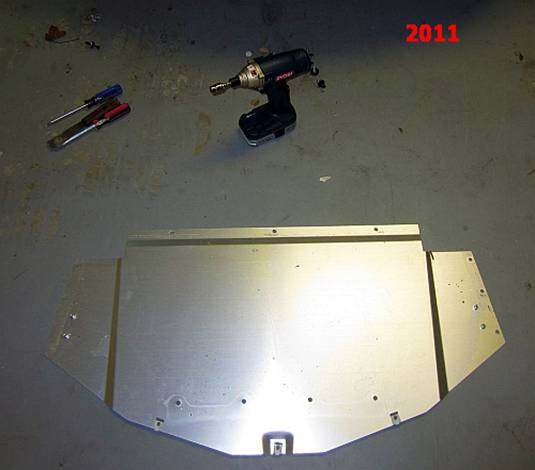 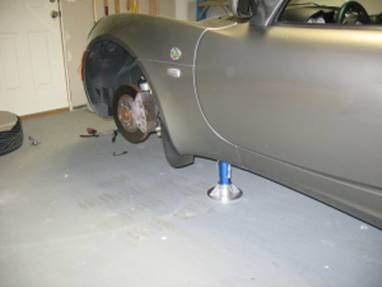 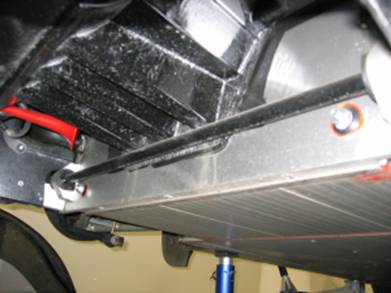 4. Remove both front shock/spring assemblies. (This step is not strictly necessary, but is quick and makes other steps easier.)

[BH] I elected to make a new tool and avoid this step- see step 6.

5. Un-bolt the end-links from the lower suspension arm.

[BH] Using two 17 mm wrenches, there is a flat spot on the metal piece next to the grease boot that needs to be held with one wrench while the other wrench is used to loosen/remove the bolt. Repeat this step for top and bottom for both sides. 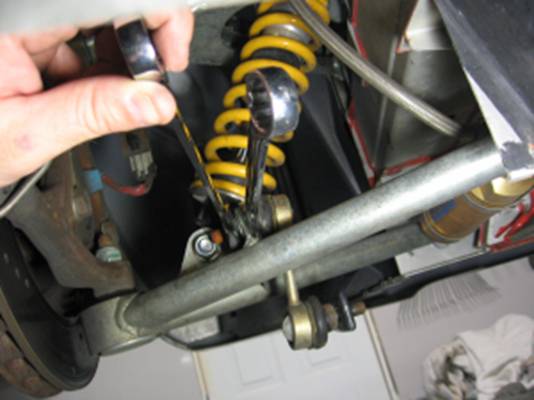 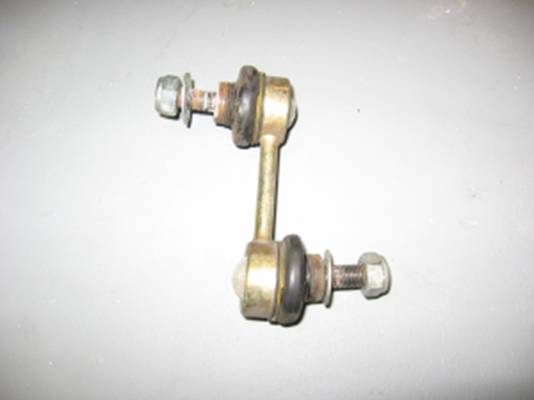 6. Now for the tedious part… Un-bolt the anti-roll bar mounting brackets from the chassis. There are 2 button head screws on each of the two brackets. They use a 6mm Allen key, and are exceedingly annoying to remove. The top bolt is accessible with a long Allen key from a small hole in the aluminum extrusion in front of it. The lower bolt is accessible by lifting the lower suspension arm up and out of the way. (This is why we removed the shocks.) We found it necessary to place a 6mm box wrench on the Allen key, and use a breaker bar on the 6mm wrench to get sufficient leverage to break these bolts loose. You may find it slightly easier to do with the anti-roll bar rotated down and out of the way.

[BH] To make jobs a little easier I sometimes have found it necessary to fabricate tools. I have a bag of cheap tools just for this purpose. For this job I found it much easier to modify a 6 mm HEX wrench by cutting the short end down with a grinder so that it would fit in the Allen-head bolts without using the access hole and without removing any suspension components. To break the bolts loose I grabbed a large box end wrench (disregard the pic with the ViceGrips- they don’t work as well) and placed it on the long end of the hex wrench for leverage, once broken loose they were removed with the HEX wrench- this was tedious due to the Allen-head bolt design and limited space but the good part is you won’t be using these again. There is an access hole for the top HEX bolt so I used a ratchet and long HEX socket for this one, custom tool used for bottom HEX Bolt. 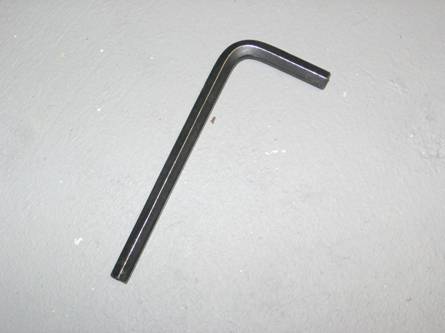 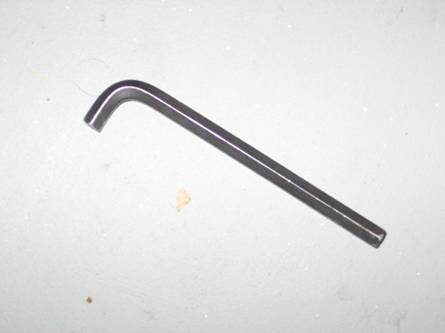 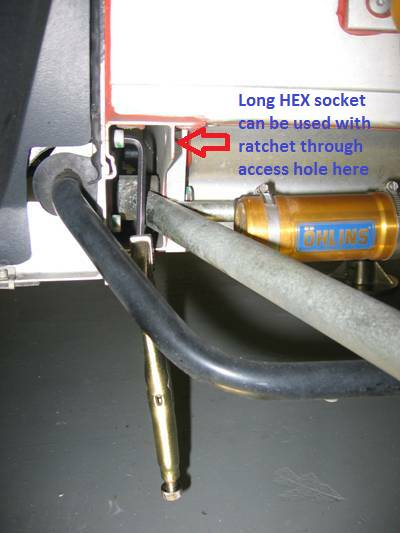 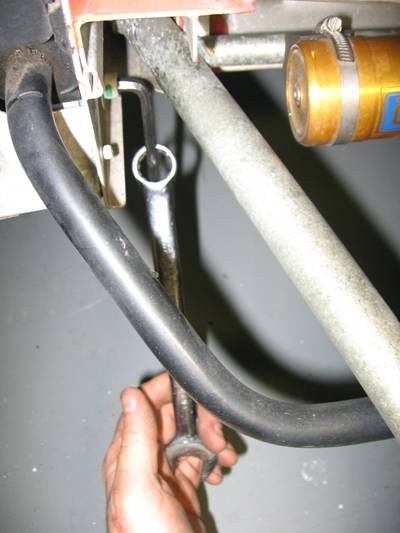 7. Once all 4 bolts are out, the bar is now loose. However, in order to remove the bar, one of the aluminum end panels needs to be removed. It is secured with 3 rivets which can be drilled out or cut off with a Dremel.

[BH] For the 2005 that had this plate I found that a Dremel with a carbide cutting tip worked the best. The mounting clip for the under-tray also needs to be removed, it just pulls off. Once the piece on one end is removed the sway bar can be twisted to maneuver the other side out.

The 2011 did not have this plate and may have been part of the 2006 design update that uses a different under-panel for reinforcing this area in place of the plate- so plastic fender liner did not have to be removed for R&R. 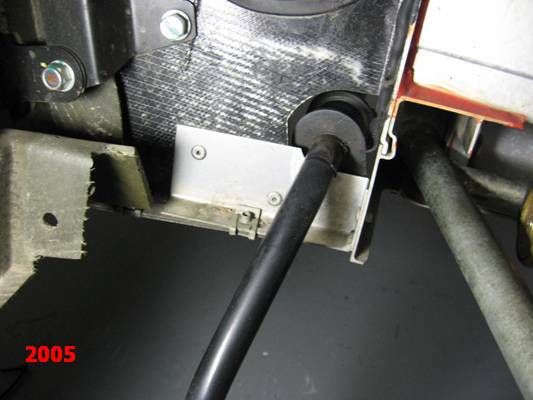 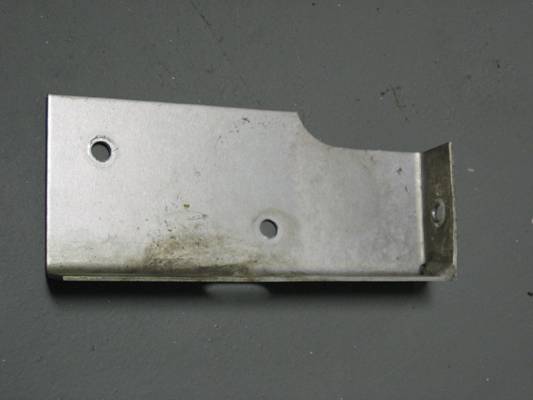 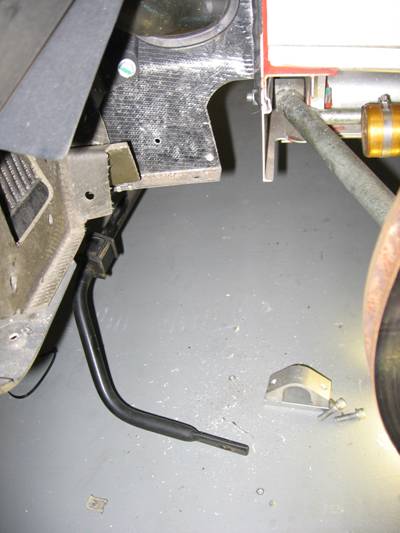 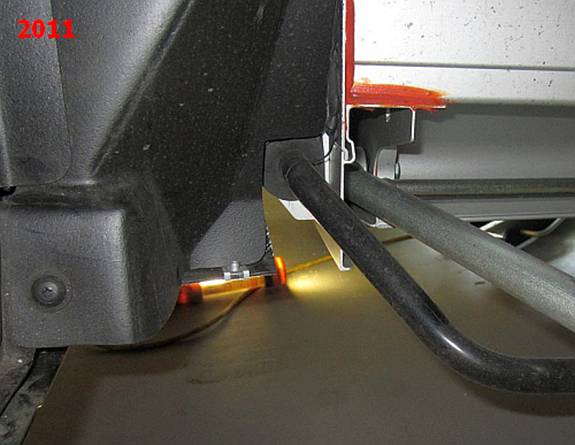 8. Remove the stock bushings from the bar and install onto the BWR bar using the lithium grease included for this purpose. 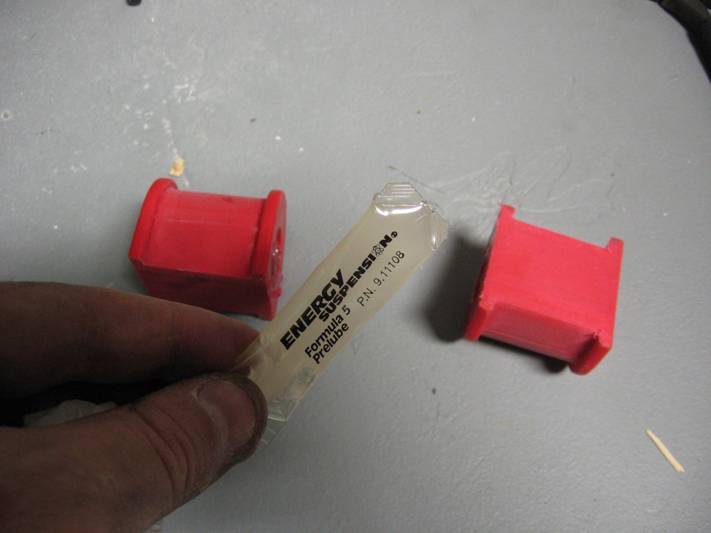 9. Bolt the new bar into place using the original brackets. We have included standard hex head bolts to replace the original button heads. The arms of the bar should dip downward and point towards the rear of the car when installed properly.

[BH] I re-used the OE washers with the new provided BWR hardware for the endlink nuts and the bushing bracket bolts. 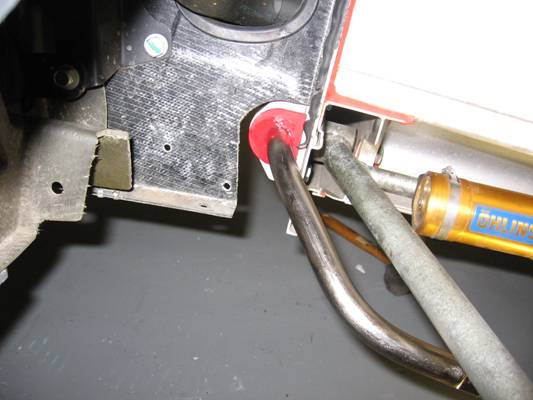 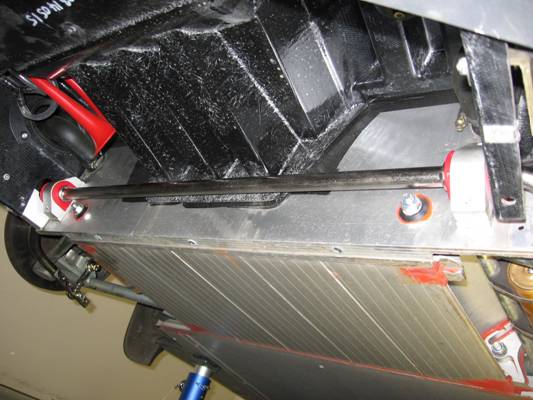 10. The end panel can now be riveted back into place. Small bolts and lock nuts can be used if you don’t have access to a rivet tool.

[BH] I used 3/16” x 5mm rivets, worked perfectly although it is hard to access the rear rivet hole with the rivet gun. 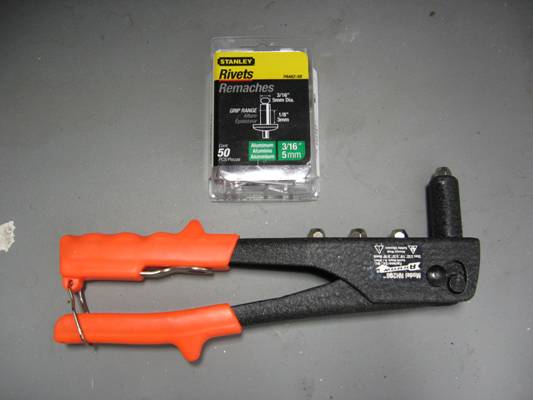 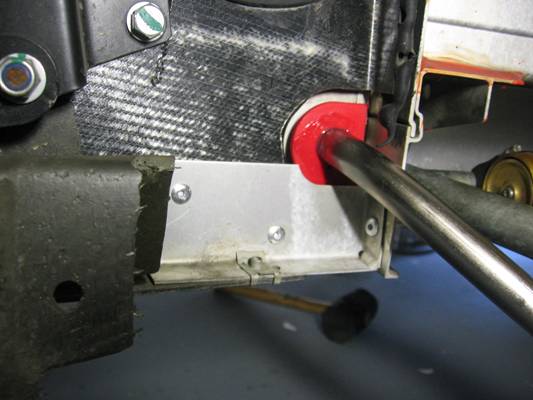 11. Re-install the front under tray.

12. Attach the end-links at this time. On one side, attach top and bottom, but only bolt the other side to the suspension arm for now. For easy adjustment later, install the adjustable end-links with the wrench slot closest to the ground. (See the end of this document for setting recommendations.) 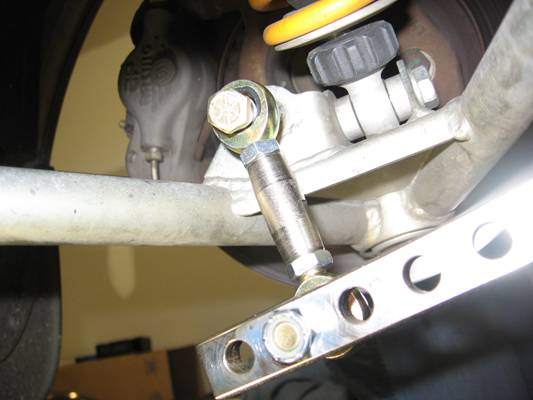 13. Re-install the shocks (if applicable) and wheels, and lower the car to the ground.

14. Before fastening the final end-link, you’ll need to roll the car back and forth to settle the suspension, and sit in the driver’s seat while someone bolts the last

end-link to the bar. This is to remove any pre-load on the anti-roll bar. Don’t run over your assistant in your haste to test your new toy.

The BWR adjustable anti-roll bar has 5 settings. #1 is softest (at the end of the arm), #5 is stiffest. The #2 setting is approximately 60% stiffer than stock, and each hole is approximately a 2% change.

#1 - Stock Elise with A048s should start here, and go stiffer if you are still experiencing too much oversteer.

#4 – This is where we like the car when using the current crop of R-compound tires. 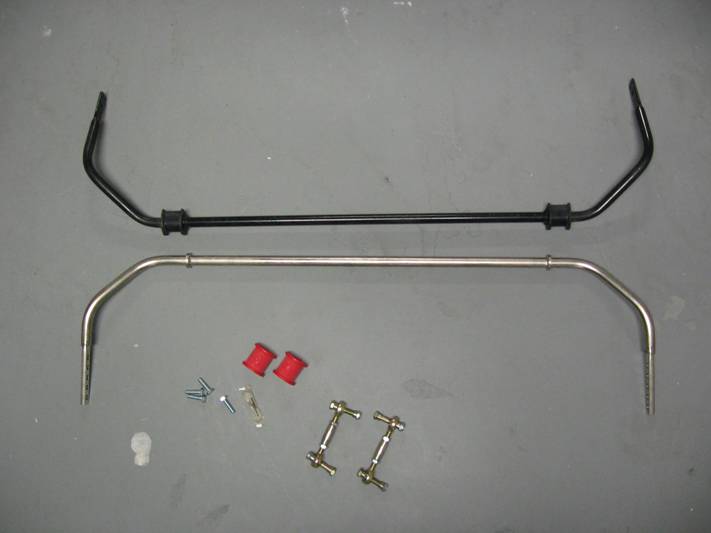 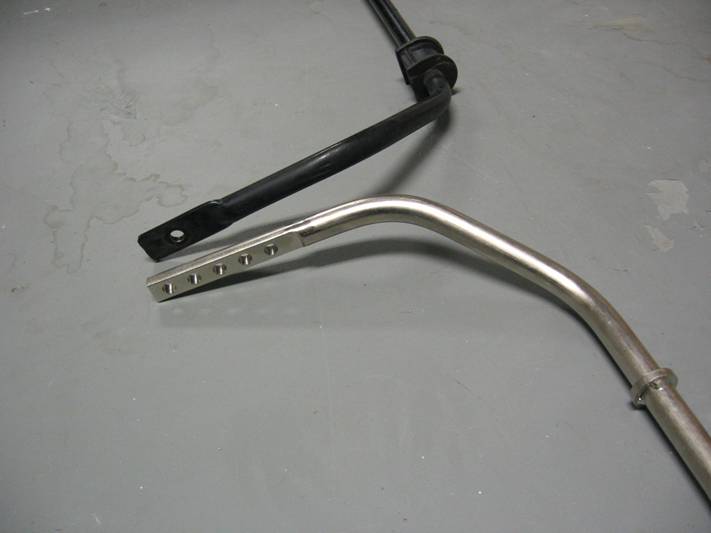 UPDATE: Jim was kind enough to email some pics of the new installation of the endlinks, BlackWatch now includes an extra spacer so that the endlink is more vertical (but no worries, Robert assured me that those of us with the original setup are fine) 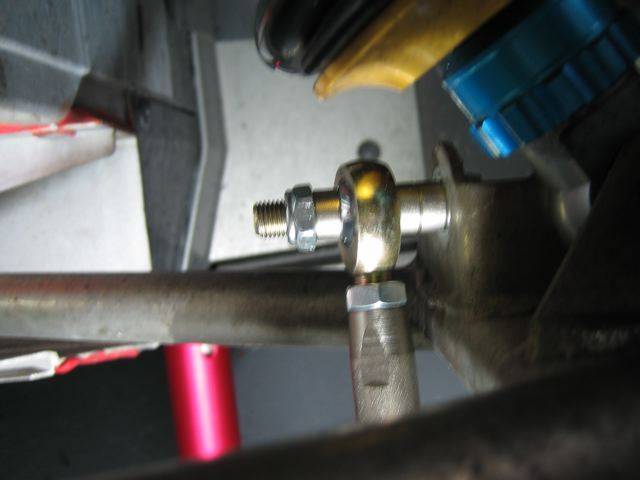 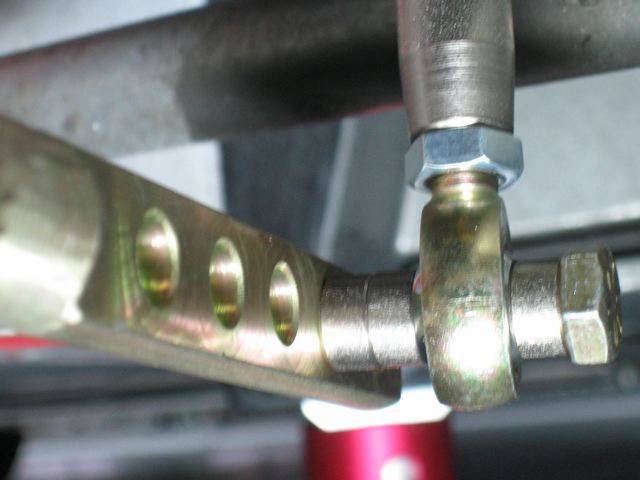